President Liebowitz sent an email concerning divestment to students, faculty and staff on Tuesday December 4, 2012. He announced that at least $33 million of the endowment is invested in fossil fuel companies and at least $7 million is invested in arms manufacturers.

Does our “fiduciary responsibility” take into account what we ought to be paying to clean up after these companies? Does it take into account the human costs? If it did, would we still invest in fossil fuel companies and arms manufacturers? 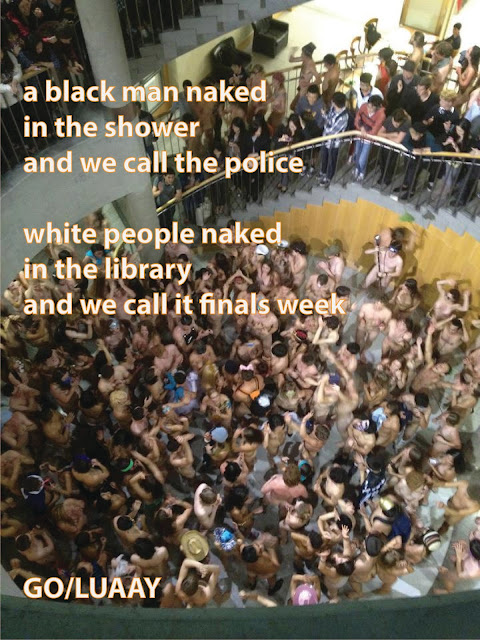 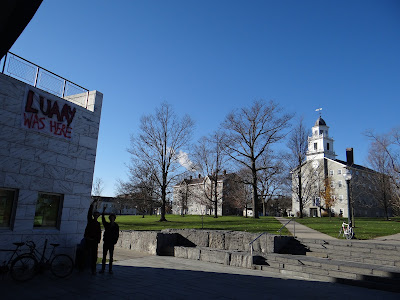 Originally Published in The Nation, 20 October 1956.

Since I was twenty-one in 1889, I have in theory followed the voting plan strongly advocated by Sidney Lens in The Nation of August 4, i.e., voting for a third party even when its chances were hopeless, if the main parties were unsatisfactory; or, in absence of a third choice, voting for the lesser of two evils. My action, however, had to be limited by the candidates’ attitude toward Negroes. Of my adult life, I have spent twenty-three years living and teaching in the South, where my voting choice was not asked. I was disfranchised by law or administration. In the North I lived in all thirty-two years, covering eight Presidential elections. In 1912 I wanted to support Theodore Roosevelt, but his Bull Moose convention dodged the Negro problem and I tried to help elect Wilson as a liberal Southerner. Under Wilson came the worst attempt at Jim Crow legislation and discrimination in civil service that we had experienced since the Civil War. In 1916 I took Hughes as the lesser of two evils. He promised Negroes nothing and kept his word. In 1920, I supported Harding because of his promise to liberate Haiti. In 1924, I voted for La Follette, although I knew he could not be elected. In 1928, Negroes faced absolute dilemma. Neither Hoover nor Smith wanted the Negro vote and both publicly insulted us. I voted for Norman Thomas and the Socialists, although the Socialists had attempted to Jim Crow Negro members in the South. In 1932 I voted for Franklin Roosevelt, since Hoover was unthinkable and Roosevelt’s attitude toward workers most realistic. I was again in the South from 1934 until 1944. Technically I could vote, but the election in which I could vote was a farce. The real election was the White Primary.

Retired “for age” in 1944, I returned to the North and found a party to my liking. In 1948, I voted the Progressive ticket for Henry Wallace and in 1952 for Vincent Hallinan.

The Institution Strikes Back

Forest residents are likely aware that some individual(s) took it upon themselves to begin the re-decoration (de-institutionalization) of LoFo. In an email sent out to residents, Linda Schiffer made it clear: “It was the decision following the building’s renovation, to leave these walls just painted.  As blank as they are, that is the decision.” Who was involved in this decision at the time of renovation? Who was not involved?
I question the ease with which the original student art was painted over, and again how quickly it was repainted when a threat to this institutional decision materialized. LoFo as it exists now is a neutered space, deprived of the art that gave it character and made it a beloved student space. How much time and money was just spent to re-institutionalize LoFo back into a grey-washed space? And why? Because “the decision” has been made?
The act of re-decoration seems to be primarily a political act, organized against the institutionalization of the space. We must address this underlying message and not write it off as senseless dorm damage.
We must ask ourselves why this space exists – and for whom. Ultimately, we must begin a conversation about how we want our space to be used, including how it should look. It cannot be a decision made by administrators alone and handed down from the top. It must come as a dialogue between students, deans, and staff. That is, if we place any value on student input.
For the sake of full disclosure, here are two other pieces of art that were not included on the email to Forest residents: 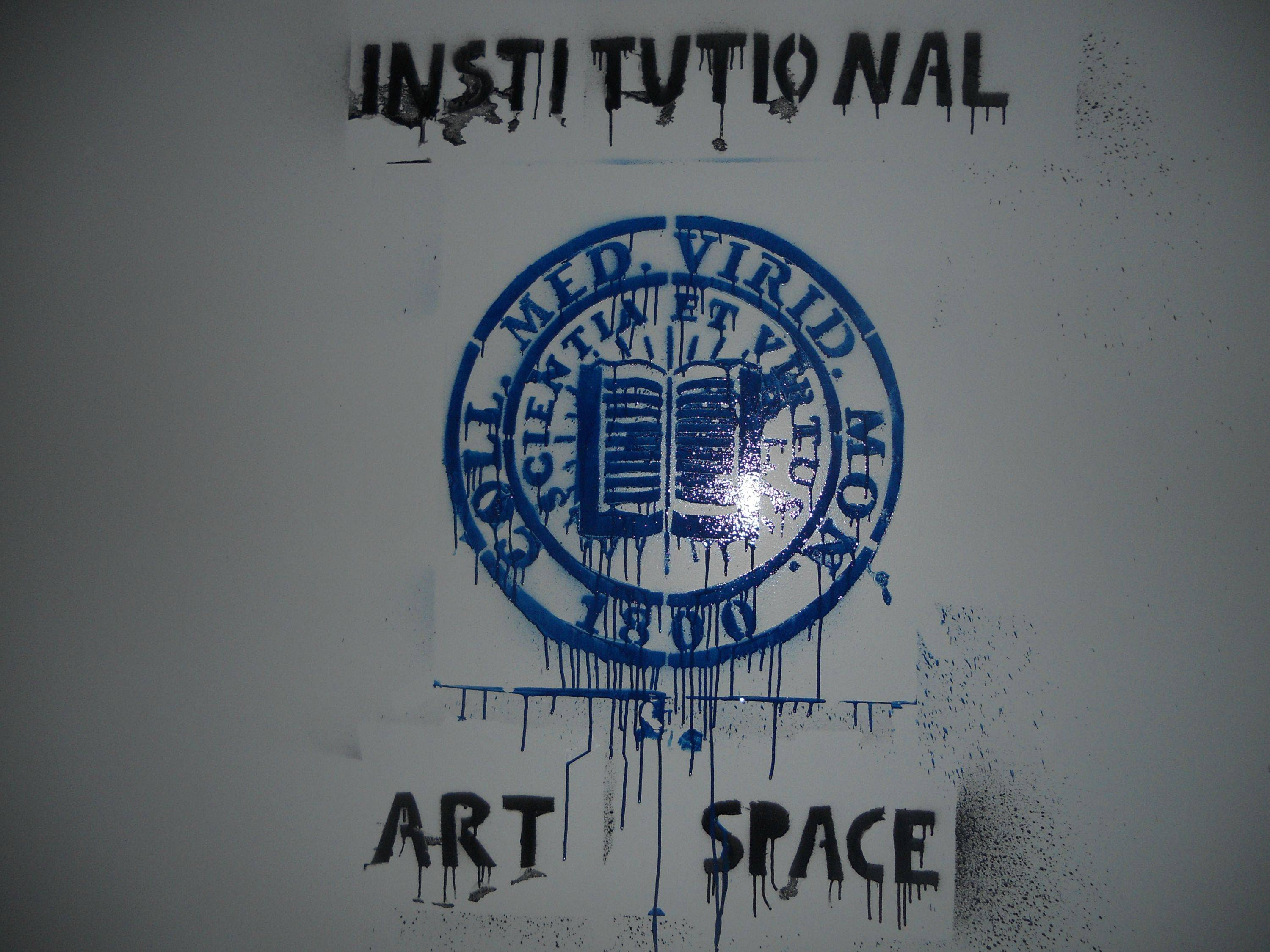 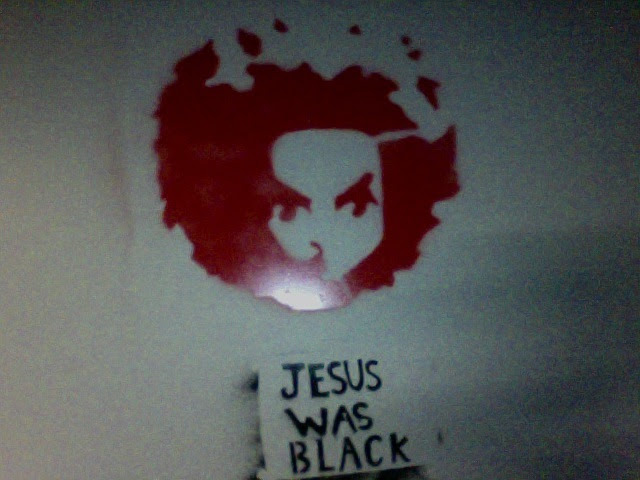 So today I received an email from the esteemed MCAB president regarding the sad state of the Middlebury Bunker. Google took the opportunity to make some recommendations as to what I may be interested in.
Posted by THE GADFLY at 12:00 PM 1 comment:

Email ThisBlogThis!Share to TwitterShare to FacebookShare to Pinterest
Labels: Mariana

A Brief Report on the Most Bothersome Internet Posts Today

A neo-columbian take on the eastern seaboard. Abhorrent and divisive? Yes.
But who knew that NJ had such contested internal politics? This map is both fascinating and disgusting.
Below you should find a Cartography final created by a Rutgers University
student majoring in Ethnic Studies and Political Communications.
He recently failed the semester.
Click here for a full-size image.
--------------------------

Courtesy of Mondoweiss, covering "The War of Ideas in the Middle East"

Mohamed Arafi is suing his employer for barring him from servicing an Israeli delegation staying at a Washington, D.C. hotel

Scroll down to see Max Blumenthal's thoughts on the case.
Israeli Defense Minister Ehud Barak was in town to address the Brookings Institution’s Saban Forum, and Mohamed Arafi, a Moroccan-born U.S. citizen, was ready to work. An entire Israeli delegation, including Barak, was staying at Washington, D.C.’s high-end Mandarin Oriental Hotel, where Arafi has been a valet dry cleaner since late 2009. But when he showed up to work on December 10, 2010, he was told that he was barred from working the two floors where the Israelis were staying. The reason given, according to Arafi, was because he is Muslim, and the Israeli delegation did not want to be served by Muslims.
Now, Arafi and the Council on American-Islamic Relations (CAIR) are fighting back in the form of legal action alleging employment discrimination by the hotel against Arafi. The recently filed case is currently in district court in Washington, D.C, and comes on the heels of an inconclusive Equal Employment Opportunity Commission ruling on the case.
The hotel is not backing down, and responded in a Nov. 28 filing (pdf) that they were following a national security directive from the State Department that barred Arafi and 11 other employees from serving the Israeli delegation.
Arafi says that the hotel has also punished him for speaking out by cutting his workweek from five days to two days, and that his work colleagues said demeaning things about Muslims to him after the incident became known to them.
“What they want me to do is just quit,” Arafi said in a phone interview. “I don’t want to run away…I want to stay there until I have my rights.” The company has denied Arafi’s charges.
The case could also be seen as a stark illustration of the consequences of Israeli-style “war on terror” attitudes towards Muslims.
The lawsuit describes what happened (pdf), according to Arafi, when the Israeli delegation came to the hotel:

Ms. Escander, [Arafi’s supervisor], stated to Boris [another employee], “Boris, Israel is here. You go up and get the dry cleaning for Mohamed.” Mr. Arafi was confused and asked for an explanation. Ms. Escander stated to Plaintiff, “You know the Israeli delegation is here. You cannot go on the 8th and 9th floor (to pick up or deliver laundry).” Plaintiff asked for further explanation. Ms. Escander stated, “You know how the Israelis are with Arabs and Muslims. It’s better if you just let Boris go.”

Democracy in America is a sick joke and the masses aren't laughing anymore.

http://www.huffingtonpost.com/steven-van-zandt/democracy-in-america_b_1139463.html?ref=fb&src=sp&comm_ref=false
Posted by THE GADFLY at 2:51 PM No comments:

Don't Ignore the Climate Talks: A Problem Greater Than Inaction

The COP17 Durban Climate Ministers are sending a clear message, if ever so politely: "Fuck you, Africa." Keep reading to find an article after the break featuring South African Professor Patrick Bond on the new privatization of soil, activist intimidation, and a Seattle '99 style walkout.

But first you gotta ask- who let this guy crash the party? 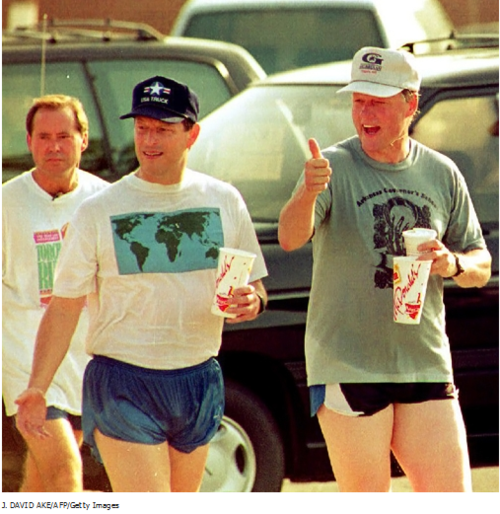